ABOUT
Foreword by Pat Boone

In ancient times merchants used a scale and weights to measure how much was sold and paid. Cheating often happened, and the Bible has many condemnations of those who use crooked scales and dishonest weights as a way to steal from others. 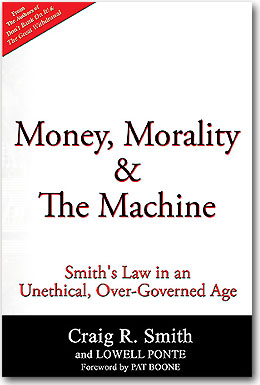 In this book my long-trusted friend and advisor Craig Smith and former Reader's Digest Roving Editor Lowell Ponte look at what has happened to our values since politicians switched Constitutional dollars backed by precious metal for today’s paper dollars backed by…nothing.

A nation’s currency has consequences, they show. Bad, debased money drives good morals out of society, causing a downward money-and-morality spiral that goes on debasing our money and its users.

We are paying a terrible price for this not only in our pocketbooks but also in social insecurity, fear, expanding government, and shrinking faith, trust, integrity, work, and freedom. Our dollar, which says “In God We Trust,” is being “weighed in the balances and found wanting.”

Craig and Lowell show how each of us can return to honest money, and how this could help restore America’s national defense and future.